Color variants of the Akita Inu

The coat feels hard and rough but protects against wind and weather with a soft, dense undercoat. Traditionally, the coat color is red or sesame (red coat with black tips). But brindle and white dogs are also accepted. According to the breed standard, all colors (except a colored white dog) must have the so-called “Urachiro”. That means white hair on the side of the tail, the sideburns, the underside of the jaw, on the neck, the belly, and on the inside of the legs.

Targeted breeding of the original breed

The Japanese recognized the significance of the proud dog to their country fairly early on and encouraged the targeted breeding of this national breed since the early 20th century. It is therefore not surprising that the different lines that developed over the years through crosses (eg with the German Shepherd Dog) were not accepted in Japan. From the perspective of Japanese cynologists, this led to a split rather than an enrichment of the breed. That is why the original breed was bred in Japan – long-legged, with the typical Keeshonden head, slightly narrower and with a shorter back than the American Akita. Crosses with the Japanese hunting dog Kishu Inu, with Japanese sled dogs, the Chow (link), and especially with the Matagi Ataki should help to achieve this goal. 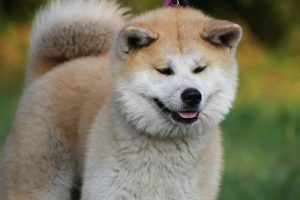 Healthy purebred dogs with character as a breeding goal

Preserving the original pure breed is now central to today’s breeders – not only in Japan but also in many other European countries. In collaboration with scientists and researchers, they try to preserve characteristics of the original breed while at the same time avoiding genetic defects or undesirable characteristics in breeding stock. The goal of breeding healthy and socially purebred dogs can only be achieved through strict breeding requirements and a lot of effort from the breeder. Animals that are susceptible to diseases are not accepted and are consistently excluded from breeding.

What about the Akita’s health?

Nevertheless, a few representatives of this Japanese dog breed still face health problems. Such as skin and hair disorders (eg tendonitis), autoimmune disorders, progressive retinal atrophy, epilepsy, thyroid disorders, and last but not least the widespread hip dysplasia (HD) common in large breeds. In responsible breeding, breeding animals are tested for all typical diseases in order to reduce the risk of disease as much as possible.

Why do puppies need papers?

Anyone who chooses an Akita as a new family member should therefore only deal with serious breeders who are affiliated with Akita associations and who breed according to the rules of the FCI. Only in this way can it be ensured that all regulations and requirements of the breed are met and that you get a healthy pedigree dog that will provide years of pleasure. You’re not only doing the Akitaras but also yourself a favor if you make a big deal about “cute” puppies offered by breeders who are only out for profit.

Nutrition for the Akita Inu

A prerequisite for a long dog’s life is not only buying a healthy puppy but also a diet tailored to the animal. When choosing food, just like when buying a puppy, not only the price but also the quality should be decisive. However, that does not mean that the most expensive food is automatically the best. Regardless of the price, you should also take a look at the ingredients list. It is important that the food is balanced and that your dog is provided with all-important nutrients. 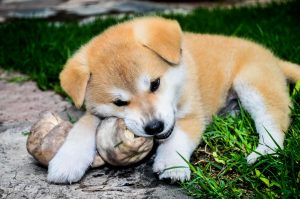 The Akita is known for making high demands on food. Sometimes it can take a while before you have found the right food that is not only healthy but also appeals to your four-legged friend. It is better not to switch to another food too quickly. Give your dog the chance to get used to the taste slowly. The stomach also needs time to digest the food properly. Changing food too often is not good for the dog’s body and can lead to diarrhea or constipation. So get your dog used to the new food step by step – it may take a week to switch to another food by mixing more of the new food into the old food.

Which food is the right food for the Akita?

Simply put dog food consists of meat (about 70 percent) and lots of vegetables (about 20 to 30 percent). However, dogs hardly need grain. Sweeteners (eg sugar) or artificial flavor enhancers have absolutely nothing to do with the food bowl. Because the Akita is prone to skin problems such as allergic rashes, you should not feed pork and soy products. Also, many sweets as a snack should be left out. Feeding your Akita twice a day is sufficient. Meat from beef, lamb, game, and ostrich is recommended – which form you feed it in is up to you and the taste of the dog. With dry meat, you should make sure that your dog gets enough water. Also, theBARF method is well-liked by many representatives of this breed. BARF refers to raw feed biologically tailored to the animal.

How much time does it take to care for an Akita?

Proper care also contributes to the health of your four-legged friend. In general, the Akita’s harsh short coat, which has an excellent self-cleaning mechanism, does not place high demands on coat care. During the molt (twice a year), however, it is a different story. To remove the old dead hair from the coat, you must brush thoroughly every day during this period.

How to properly keep the Akita Inu?

At first glance, the Akita appears to be an undemanding dog: it likes quiet long walks and does not need sporting and mental challenges every day as is the case with other dog breeds. But the dog has a stubborn character, which means that people need knowledge, patience, and empathy in daily dealings. 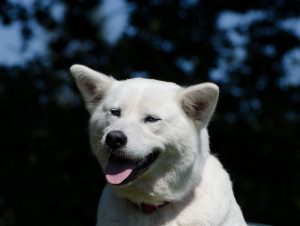 Who is an Akita suitable for?

An Akita, therefore, needs an experienced owner who has experience with dogs and who knows a lot about their upbringing. In addition, he must have the time and inclination to keep himself seriously and intensively occupied with the dog. An early and consistent upbringing and extensive socialization are necessary for a harmonious coexistence with the Akita. But even with that, you will not achieve that the dog is happy when he meets other members of the same species – an Akita is and remains a loner who is satisfied with the company of his owner. If you dream of having a dog that you can easily take with you everywhere and that you don’t mind hectic and that likes to fool around with you, you have come to the wrong place with this pedigree dog.