The Beagle’s short legs can be deceiving – this medium-sized dog breed keeps you moving and is always full of surprises. This friendly dog ​​is active, fearless, and very smart.

The appearance of the beagle

The Beagle is a medium-sized, compact dog. It can grow up to 40 centimeters and weighs up to 18 kilograms. Its short legs are particularly strong and give the Beagle speed and stamina. The Beagle’s head is long, its low-slung, rounded ears make it particularly famous. Every color except leather brown is known. The mainly occurring color variations are bicolored brown/white, red/white, yellow/white, but also tricolored in black/brown/white. According to breeding standards, the tip of the tail should always be white. 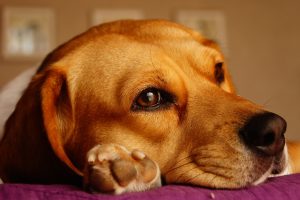 A Beagle knows what he wants. He owes his good sense of smell and his speed to his heritage as a hunting dog. The breed, therefore, has a strong hunting instinct – so many Beagles disappear far into the woods reacting to a hare, despite their owner’s calls. These cunning dogs may look innocent, but they still need a strong hand. If you don’t make it clear to your Beagle from the start who’s boss, you should keep in mind that your dog is pulling the strings. In the worst sense of the word… The dog originally used as a hunting dog energetically pursues its goal, both during a walk in the woods and during everyday life.

As a hunting dog, the Beagle is sociable and gets along well with other dogs of any breed, age or size. When living with other dogs, it is even more important to set boundaries and to raise the Beagle and its peers well and consistently. If this is not done correctly, the Beagle will take on the role of an alpha dog and turn your whole house upside down. One of his qualities as a hunting dog is certainly his insatiability of a Beagle knows no bounds and does not even stop with unhealthy or dangerous food, for example, Christmas chocolates… 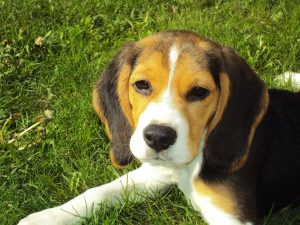 Intelligent dogs like the Beagle need activity. Beagles love intelligent games, but he also appreciates agility or long walks with his owners. Most importantly, there is something to do! The Beagle likes to be with everything and therefore fits perfectly with active people. He feels particularly well in lively families, possibly with children!

It cannot be emphasized enough: a Beagle may look cuddly, but they are intelligent, confident dogs that need a firm hand. The consequence is fundamental to life with a Beagle. A Beagle is not reluctant or untrainable, but they know what they want and can be very dominant if they don’t consider their owners to be the alpha. Don’t give in to the pleading look with their shiny dog ​​eyes, that’s how you let your Beagle know who’s in charge. As intelligent animals, the Beagles are willing to learn, and consequently, become good four-legged companions!

History of the Beagle

These features are not accidental. The Beagles were seen for years as a hunting dogs, and breeding goes back to the so-called Humbertus or Northern dog, which the Normans had with them during the conquest of Great Britain in 1066. Around 1400, the Beagle was crossed with the spotted Southern Hound from southern France. For the original breeders, the past as a hunting dog and the possibilities for use in hunting was important. The name ‘Beagle’ appeared in the household books of King Henry VIII around 1515. In the year 1615 a small breed of dog called ‘Little Beagle’ is first mentioned, which fit in the bags of the hunters due to its small size. These excellent hunting dogs have attributed a good hunting instinct, the term ‘beagling’ means a hunt with the support of a group of dogs.

To this heritage, the Beagle owes not only its appearance but also its friendly nature. As a hunting and group dog, the Beagle knows what it wants. The Beagle is intelligent, determined, and friendly. He is very sociable and therefore the ideal family dog.

Because of its size, the Beagle is not a retriever. Even a hare is too big for this medium-sized dog. However, thanks to his hunting talent and intuition, the Beagle is popular for towing. He is not afraid of water and likes to work in groups. Despite this, at least in Germany, the Beagle is rarely seen as a hunting dog anymore. The legal stipulations that territory of 1000 hectares is required for group hunting severely limits the possibilities…

Nevertheless, this four-legged friend is a perfect addition to an active family. Instead, the Beagle is also used as a therapy dog ​​– unfortunately also as a laboratory animal thanks to its gentle nature… In fact, the Beagle is the most commonly used breed of dog for scientific research.

Its excellent sense of smell makes the Beagle perfect for working on border patrols. In the United States, the so-called Beagle Brigade has therefore been used since the 1980s to search for illegal plant and animal products and food stuffs at customs and border control.

For hundreds of years, this dog has been bred for its hunting qualities. This targeted breeding method also has drawbacks: like many other dog breeds, this dog is predisposed to certain diseases. Thanks to his stocky physique, hernias, obesity, and meningitis arteritis are common examples.

The Beagle is a prey-oriented dog which gives him an insatiable appetite. In the end, when living in a group it comes down to Who will be the fastest feeders gets the most! This urge often leads to overweight for family dogs, who do not get much exercise. The best remedy is lots of exercises. Keep your Beagle active both physically and mentally. Healthy food is also an important part of keeping a dog like this one. Don’t reward every begging with something tasty – especially unhealthy leftovers or sweets! Unfortunately, these dogs do not always know what is good for them and what is not.

Excess weight puts a strain on the spine and joints. Long, small Beagles are therefore extra prone to hernias. Meningitis arteritis, also known as Beagle Pain Syndrome, is often diagnosed. This relatively common condition, the cause of which is unknown, causes inflammation of the spinal cord and blood vessels. Treatments often last for months, including a long course of antibiotics.

Another common disease in Beagles: Dog ataxia. Canine ataxia is a neurological condition also known as degenerative myelopathy. A degenerative inflammation of the spinal cord and the gray matter in the brain stem manifests itself in movement disorders and spastic paralysis but does not appear to be painful for the dog. The cause is described as an excessive feeding of the stomach.

Unfortunately, his floppy ears make this dog prone to ear infections. Trapped secretions or outside substances, such as blades of grass, cause painful inflammation. Pests such as mites also feel comfortable in a Beagle’s ears. The first warning of this can be violent shaking or tilting of the head.

Unfortunately, the large, round eyes are not spared from diseases either. Glaucoma, corneal dystrophy or retinal Astrophys are eye diseases that are particularly common in Beagles.

All in all, the Beagle is an active, intelligent dog that can live to be twelve to fifteen years old. If you want to give your Beagle a healthy and long life, you need to feed it a healthy diet, exercise a lot to reduce the risk of being overweight, and consult a veterinarian on a regular basis. 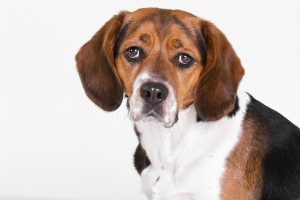 When your Beagle gets older

Older animals, of course, need special care. If your Beagles lose sight, sense of smell, and mobility, seek veterinary advice and have your Beagle tested for degenerative joint disease. Also for an older Beagle is a healthy food essential. In addition, make sure that your dog gets enough nutrients without this leading to unnecessary weight gain.

Although the Beagle was originally bred in Great Britain, the targeted breeding has also taken place in Germany. Beagle breeders can register with various pedigree dog associations throughout Germany.

You may think that a family dog ​​needs no documents, but you should never trust an unreliable breeder who offers ‘purebred dogs without documents’. Breeding animals is a time consuming and expensive hobby. Breeders must not only feed the animals until they move to another home and socialize the animal, but are also responsible for the breed’s gene pool.

It is not only about the external appearance, but also about the health of the animals. Breeding societies not only monitor the living conditions of the animals but also ensure that they are mated on purpose. In addition, unreliable breeders often use related animals, which increases the risk of hereditary diseases… Puppies from such an unreliable litter are usually both unsocialized or vaccinated,

A reputable breeder, on the other hand, can provide information about your prospective pet’s parents — even with medical records if you ask. Litter care is costly, so don’t be surprised if the reliable breeder offers only two litters a year, with a very small selection. In addition, the Beagle mother must also be able to recover after a litter. After eight to ten weeks, the puppies are ready for a new home.

Purebred dogs are expensive but are worth their money.

An alternative is the animal shelter, where many dogs are waiting for a good home – including many Beagles! Animal shelter workers can generally provide you with detailed information about the dog’s character and history. Adult dogs may not be as cute as puppies, but providing a good new home to an adult Beagle can be very rewarding too! They will bring great joy to you and your family and enrich your life with their sunny dispositions and curious personality.

We wish you and your Beagle a wonderful life together full of adventure!