Bearded Collie enthusiasts agree: ‘If you don’t know this dog breed, you should experience it!’ And anyone who has ever witnessed a Bearded Collie with drenched fur happily leaping through the meadow, frolicking with energy and joy, while being alert and vigilant to its owner’s wishes, will fall head over heels for this original breed of dog with their signature charm.

Bearded Collies are very lively and active dogs, who go through life with confidence. Despite their strong temperament, they show no signs of aggression or nervousness. On the contrary, Bearded Collies are considered sensitive and very attentive. Thanks to their high intelligence and good observation skills, they seem to know exactly what behavior is expected of them. Bearded Collies want to give birth to their owners. And even if this trait is not mentioned in the official breed standard of the FCI, one can describe the Bearded Collie as having great adaptability that is highly people-oriented. They fulfill the tasks that life – and their owners – demand of them with great dedication, without neglecting their natural personality. Their cheerful nature seems unassailable,

Loud, shrill noises are not to their liking and the noise-sensitive Beardie prefers to hide in a quiet corner during a violent storm. This trait even misappropriated the Bearded Collie as a ‘trembling pile of wool’. They are sensitive but not ‘oversensitive’ and even being startled by a loud noise does not mean they are disturbed or even their mental balance is disturbed. In fact, among the descendants of the Scottish sheepdogs, the Bearded Collie is the only representative who, in his original assignment as a herding dog, mastered both herding and herding, as well as guarding and protecting the animals.

To date, this breed has maintained its innate alertness, yet the Bearded Collie is always calm and composed and does not show itself too fierce in its reactions. Even in their upbringing, they reject strict and harsh orders. Soft and calm tones more often lead to the desired effect. In return, the lovable Bearded Collie proves to be the perfect companion for families or singles, who remain loyal to their owners in any situation. 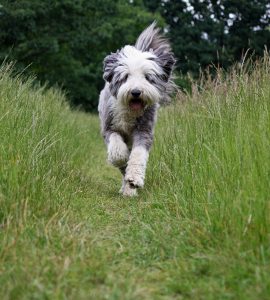 A Bearded Collie is guaranteed to bring joy into your home, but of course also some dirt on the paws. A stick or a bit of sand sometimes gets stuck in its long fur during a long walk in nature. Thanks to the short, fairly hard bristles, the pollution does not last long. Sand and mud usually fall off on their own and tasks and leaves can be easily removed by hand or a comb.

Under the long topcoat, which is standard smooth or slightly wavy, the body is covered with a soft, furry undercoat. Despite the strong, shaggy coat, the Bearded Collie doesn’t look chubby. According to the official FCI breed standard, the hair should be dense and long enough to provide adequate protection, but not too long to maintain the natural body shape. His strong, athletic physique has yet to show through under the full coat.

A former herding dog, the Bearded Collie is a slender, active dog that has enough distance from the ground and is anything but cumbersome. The height at the withers is 53-56 centimeters in males and 51-53 centimeters in females.

While the fur around its nose is rather sparsely covered, it comes to length on the cheeks and chin, forming a typical beard. This trait eventually gave the breed their name: Bearded Collie – Bearded Collie or ‘Beardie’ for short.

In terms of color, the Bearded Collie is very varied. Whereat birth the basic colors of the puppies are black and white, brown and white, blue or fawn and white, the colors of adult dogs range from slate gray, red, dark brown, black, blue to all variants of gray, blue, and sand-colored. Beardies have partially white features, which can appear as a glow on the face, teeth, chest, legs as well as the tip of the tail.

Little is known about the origin of the Bearded Collie. They probably descend from the shaggy sheepdogs from Eastern Europe and Asia, who came to England in the 15th century with the sheep and cattle bought there. In Scotland, the dogs were used to herd cattle. Unlike most herding dogs, the Bearded Collie was also capable of guarding and protecting livestock from predators and robbers, leaving former herders responsible for the herd alone. In fact, they are said to be so reliable that stories have circulated of the dogs traveling alone from the London cattle market to Scotland.

In addition, there is little to learn about the origin of this breed. This may be due to the fact that the original owners of the Bearded Collies were mainly herders, who have been virtually unable to make records of the dogs due to a lack of education. At the beginning of the 20th century and in the subsequent turbulent periods surrounding the two world wars, the trail of the hard-working Beardie is almost completely lost. It was not until 1944 that the breed was rediscovered by accident.

At that time, the English dog breeder Mrs. GO Willison gave birth to a litter of Shetland cubs, but a brown and white puppy climbed out of the crate, which the breeder initially regarded as a half-breed. Four months later, a Bearded Collie was recognized in the alleged half-breed by an old hunter.

Mrs. Willison was so impressed with the endearing nature of their new dog that she helped drive the breed’s comeback. She tirelessly searched British Shepherds for rare Bearded Collies to lay a new breeding base. At the same time, she astonished fellow breeders with the rediscovery of the dog breed and motivated them to start breeding the Bearded Collie. 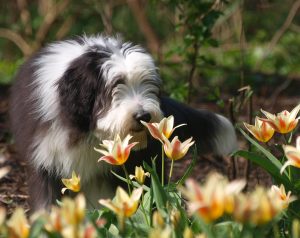 In the Netherlands, the dogs are now bred at the Dutch Bearded Collie Club. The BCCD is the first club in the Netherlands exclusively dedicated to this breed. The renowned dog breeders regularly expand the breed and carefully train young breeders. Fortunately, most breeders at the BCCD have distanced themselves from the ‘modern Bearded Collie’. The so-called ‘show Beardie’ arose in the wake of beauty breeding, as with many dog ​​breeds, which also wanted to relegate the Bearded Collie to a well-coated and striking show dog. The inbred dogs had unnaturally long hair and suffered from the coat mass. Concentration on appearance also led to changes in personality. The modern Bearded Collie reacts disproportionately anxious or even aggressive.

Today, sensible breeders are once again opting for the ‘old type’ of the Bearded Collie, where it is less about beauty, prizes and cups, but preserving the robust, strong, intelligent, and sporty family dog.

The medium-length coat of the old type does not lose the beauty of the Bearded Collie and is also much easier to maintain than the ‘trendy long’ coat of the show Beardies. Of course, the coat is still so long that dirt likes to get in, but Beardie’s coat loses less hair during the moult than some short-haired congeners. The smooth and rough texture of the coat requires regular brushing once or twice a week. More extensive than the care is therefore rather the employment of the active, enterprising Bearded Collie. Dogs of this breed enjoy long walks, where they can move freely and casually. If their owners have the right attitude with dog training, they will also learn little tricks and have fun with dog dancing. Of course, agility or drive gives a real Beardy great joy. In addition to exercise games, intelligent dogs’ love intelligent games or brain teasers.

Bearded Collies are considered easy to train, they do not tolerate strictly, but only a consistent upbringing. Whoever dedicates himself to a Bearded Collie in this way will be rewarded with a very grateful, lively, and charming dog. Because of their gentle nature, they get along well with other animals, but people always come first for him. The many Bearded Collie enthusiasts agree: once you have experienced a Beardie, you will never forget it.