The Bullmastiff is one of the youngest dog breeds in the world. While the powerful giant made life miserable for wild animals in his homeland, today the cheerful and child-friendly four-legged friend is primarily kept as a family dog. Still, the Bullmastiff is reported as a list dog in some countries.

Features of the Bullmastiff

No wonder this large and powerful dog can instill so much fear. It is better not to provoke his perceptive gaze and his strong, heavy stature, because of his past as a guard dog. Fortunately, the Bullmastiff has a very high threshold these days, which ensures that it will never attack people or animals unprovoked. This characteristic in combination with good socialization and consistent upbringing in puppyhood makes the Bullmastiff a very serene, calm, and adaptable dog that can be kept in a family with children without any problem under these circumstances.

In dealing with children, he shows himself, despite his size, flexible and soft. Thanks to his strong nerves and strong self-awareness, he can hardly be provoked by other dogs during his daily walks. Frequent or nervous barking is strange to this breed. While presenting himself as a lively, spirited, and playful dog, he also enjoys the peace of the house very much. He prefers to spend the hours that he only spends when his owner is away. 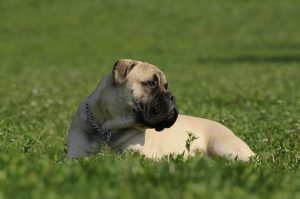 Also Read our Article About  The Amazing Boxer Dog

Despite the balance and good nature, the Bullmastiff also has a rather quirky side. He sometimes only fulfills orders from his owners after a certain delay. And at orders that he considers meaningless, his composure can sometimes turn into stubbornness. You cannot expect absolute obedience from a Bullmastiff. This is certainly also because this dog breed is not or hardly allowed to be subjugated. Their intelligence and ability to quickly assess situations make the Bullmastiff guide at eye level.

The Bullmastiff will bond closely with your family and will be loyal to you for life. Despite their self-confidence, they show that they are always good-natured, friendly and very affectionate to their owners.

However, strangers approached the Bullmastiff with skepticism and distanced. Based on his perceptiveness, he can quickly assess whether a person’s intentions are generally reliable. He soon welcomes harmless and friendly guests into his family. However, potential intruders soon realize that you should not mock the actual ‘master of the house. Also by the FCI’s standard, “his bravery, his fearlessness and his defense against invaders” are legendary. His pronounced protective instinct is innate in the Bullmastiff and needs no further promotion.

Like his protective instincts, his vigilance doesn’t need training and this breed, along with well-developed eyesight and hearing, is born. visually, physically and mentally, a Bullmastiff has everything you would expect from an excellent hunting and guard dog. He does need early socialization and education by an experienced dog owner to bring out his good-natured and calm nature and to dispel the image as a fighting dog, which is certainly not right with this friendly, reliable and versatile four-legged friend.

With a shoulder height of up to 69 centimeters and a weight of up to 60 kilograms in males, the Bullmastiff is undoubtedly a large, unwieldy dog. On the contrary, its muscular body amazes you with its strength and agility. This imposing appearance is enhanced by the square shape of the skull, due to the high set, folded back v-shaped ears.

The Bullmastiff’s forehead is unwrinkled at rest. However, once something has piqued his interest, his forehead has a significant amount of wrinkles. These characteristic forehead wrinkles, which he shows his owners when he has seen something remarkable, have meanwhile become a characteristic of this young dog breed.

In terms of color, the Bullmastiff comes in red, striped or light brown. Common to all Bullmastiffs are the black canines, which are brighter towards the eyes and complete the distinctive look of its remarkable skull. No less impressive is its very muscular neck, which almost corresponds to the circumference of the head. His broad chest reaches deep between the widely spaced, straight front legs. While white markings are undesirable under the FCI standard, at least one marking on the firm chest is allowed. 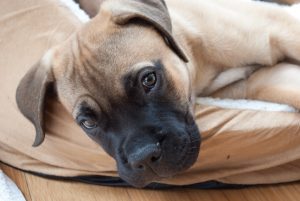 Because the Bullmastiff is a relatively young dog breed, whose origins date back to the 19th century, its history can be established with certainty. Unlike many older breeds that arose more by accident in ancient times, the Bullmastiff has been purposefully bred from the start. From the cross of the Old English Mastiff and English Bulldogs spoke to English hunters in the 19th century about the optimal hunting dog, which could reliably protect them and their game from poachers.

Although poaching was punishable by death at the time, many people at the time saw poaching as their last resort. The rise in social poverty and the growing despair of poachers always made the situation of gamekeepers who wanted to defend the wild stocks of the large landowners dangerous. To avoid the death penalty, which threatens them with the arrest by a gamekeeper, some poachers do not shy away from murder. The great hound breeds, such as the Irish Wolfhound, for example, which aided the game warden in repressing poachers, did not accomplish their intended task in an expected manner.

The extreme hunting dogs sometimes injured the poachers so much that some died as a result of the dog attack. A broad, public execution to deter other poachers could then no longer be ordered. Thus, the call for a large, strong dog who calmly and daringly, but very controlled, could catch the strobes intact where possible became louder. Crossing the Mastiff (about 60 percent) and the English Bulldog (about 40 percent) quickly achieved this goal. Thanks to purposeful, selective breeding, an excellent watchdog was created that brought all the desired characteristics with it. With the later cross with the Bloodhound, the sense of smell and associated tracking as ‘Gamekeeper’s Nightdog’, as the breed was originally called, was again significantly improved. On Christmas Eve in 1924, the new breed called ‘Bullmastiff’ was officially recognized by the English Kennel Club.

With the improvement of social structure and a general change of English possessions in the 20th century, the Bullmastiff was soon no longer needed as a watchdog for forest rangers. Thanks to his excellent detective skills and his menacing figure, he was promoted to English ‘Policedog’ shortly afterward. The universal service dog quickly became popular with American authorities as well. In its homeland of England, as in many other countries, the loyal and reliable Bullmastiff has developed into a prized companion and family dog.

The breeder SE Moseley and his ‘Farcroft’ kennel, in particular, had a large share in the worldwide popularity of the Bullmastiffs. The male strain of the ‘Farcroft Fidelity’ is now regarded as one of the best-known representatives of the early Bullmastiff breed.

Thanks to their resignation, high threshold, and self-awareness, Bullmastiffs were seen as police, search, guide, and rescue dogs. Mosely, the first president of the ‘National-Bull-Mastiff-Police-Dog-Clubs’, also recognized the optimal conditions for a family dog ​​in the dog’s reliability and good nature. For example, in 1925 he started breeding a family dog ​​from a pure hunting dog.

After the Second World War, the Bullmastiff breed was eventually also kept in Europe, where it has been bred since the mid-1970s. Responsible for the breed standard is still England, the motherland of the Bullmastiff. As a result, only cubs that exactly meet the breed standard in nature and appearance are allowed to be used as breeding animals later on. The VDH breeding judges also attach great importance to the health of the animals in their assessment. In principle, Bullmastiffs are therefore also considered to be a fairly healthy breed with a manageable number of breed-specific diseases. As with other large Molossers, including the Bullmastiff, there is a predisposition to hip problems (HD) and other musculoskeletal disorders such as heart disease.

Regardless of breed, all dogs have meat-rich food needed. Dog food should be selected based on the weight, age, and characteristics of your pet. If in doubt, ask your vet for advice. Take a look at the dog shop for different brands of dry and wet food.

Grooming the Bullmastiffs is very simple. Thanks to his short, smooth and tight coat, every now and then is enough brush to completely get rid of possible contamination from long walks in the open air.

All the more time a Bullmastiff owner should spend on training. This stubborn four-legged friend’s idiosyncratic nature, powerful size and not least the fact that he is a ‘list dog’ in some countries require an experienced owner who can provide a loving but consistent upbringing. In the best case, the education starts immediately after birth by the mother dog and the breeder and this education is continued for life by the new owner. A good addition to education is the classic training of subordination. This form of ‘working’ often gives the former working dog more pleasure than long walks. Due to their moderate urge to move, these quiet four-legged friends can also be kept in city houses despite their size.

Finally, a dog that is physically and mentally challenged will more easily follow the commands and commands of its owners. With the right training and adequate remuneration, the former guard and police dog is therefore a warm and friendly family member who not only reliably protects his family but also remains loyal to them for life.