The once-popular stable dog and rat hunter, which used to be present on almost every farm, today also likes to be the center of attention as a family dog. The characteristic German Pinscher wants to participate in everything, whether it’s exercising outside or cuddling indoors.

German Pinschers are considered very lively and active dogs but can be very affectionate and cuddly at the same time. While their need for exercise and their joy of playing outdoors in nature knows no bounds, the wise and confident dog needs to be petted indoors.

Both outside and inside their own ‘home’, the German Pinscher demands intensive care from its owners. This does not mean that he always acknowledges the will of his owners. On the contrary, the Pinscher has a mind of his own and knows exactly what he wants. Intelligent pets need their space both physically and mentally. Thanks to their strong self-confidence, their strong nerves, and intelligence, they keep everything under control. As former farm dogs, they love to watch over your home.

They are very vigilant and give an immediate ‘notification’ as soon as something out of the ordinary happens. A stranger can never intrude on a German Pinscher’s property. A Pinscher barks but very rare. The lively, but at the same time calm and balanced, dogs are anything but ‘barkers’. 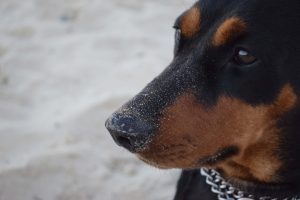 While they treat strangers with a healthy dose of suspicion, the German Pinscher is very loyal and affectionate towards their family. Of proper upbringing, which should be both loving and consistent, with a sovereign pack leader at his side, the naturally wayward animals are even extremely flexible and obedient. What matters is whether he can follow the orders of his owners. The intelligent Pinscher only learns what seems instructive from his point of view and shows it right away if he doesn’t like something.

He knows how to use his intelligence from birth. He will immediately recognize the possible weaknesses of his pack leader and knows how to use them to his advantage. Are ‘intelligent disobedience ” can therefore sometimes be a challenge for experienced dog owners. However, the propensity for independence, as well as the innate hunting instinct, differs per dog. If certain training rules are respected from the start, even the most stubborn dogs can be guided in the desired direction. Their strong yet good-natured disposition and trainability, coupled with tireless playfulness and resilience, make the German Pinscher a highly versatile and lovable family dog.

The German Pinscher is not least seen as a family dog ​​due to its short and flat coat, which is very easy to maintain. The dense coat is smooth and shiny and is usually a deep black color with red highlights. Another possibility is a pure red coloring, but this only occurs in 20 percent of the breed.

With a height of 45 to 50 cm at the withers and a weight of 14 to 20 kilograms, the German Pinscher is not ‘too small’ or ‘too big’. German Pinschers have a square build, that is, the body length and height are approximately equal. Befitting the self-confident creatures, their attitude is very proud and elegant. Their strength and strength also show through a muscular body, which is expressed during movement. The strongback falls lies backward. The v-shaped floppy ears, which have not been cut since 1987, stand high on the powerful and elongated skull. They are turned forward and the inner edges are close to the cheek. The rear rims are also very thin, which can easily result in displacement in the usually very healthy dogs.

History of the German Pinscher

The fact that the German Pinscher suffers very little from canine diseases, apart from the aforementioned ear margin problems, is probably due to the fact that, despite their long history, they have never been ‘overbred’. Together with the Schnauzer, the German Pinscher is one of the oldest dog breeds in Europe. They are believed to be the direct descendants of the Peat Dogs, which experts say were kept as far back as 3000 BC. It is unclear where the breed ultimately descends from. While some researchers suspect the origin of the Pinschers in Württemberg, others believe they are derived from the English Terrier. Still, others say the opposite, that the Pinschers are the ancestors of the English Terriers.

What is certain is that the appearance of this dog breed, which was named in the ‘German Stud Book of Dogs’ in 1880, has hardly changed over the years. The classic Pinscher, as we know it today, already made its appearance in paintings from the Middle Ages and the Renaissance.

Around the turn of the century, the German Pinscher could be found on almost every farm. Here they had the task of guarding the house and yard, as well as driving out vermin such as rats, mice and stone martens. They were also used as watchdogs when the driver was briefly absent from his carriage. It was above all its versatility that characterized the Pinscher and made it an indispensable companion for farmers and landowners. This original range of duties earned him the nickname ‘Stalpinscher’.

Possibly the name ‘Pinscher’, meaning ‘biter’ in Old German, is related to the English verb ‘to pinch’, because of his activities as a skilled hunter. In this context, the English verb ‘to pinch’ can be translated as ‘pinch’ or ‘grab’ and describes how he caught mice and rats with his nimble paws. As a hunter, the Pinscher was largely self-feeding, which was another reason for its immense popularity in addition to its perseverance and self-sufficiency. 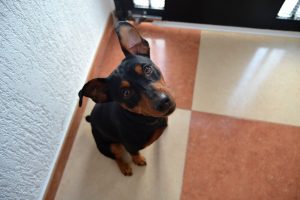 The Wirehaired Pinscher, which is today referred to as ‘Schnauzer’ and the Shorthaired German Pinscher was a common breed at the time. Both were raised and bred together by the Pinscher Club founded in 1895. Despite the now completed separation into a separate breed, the Schnauzer and Pinscher still have the joint ‘Pinscher-Schnauzer-Club 1895 EV’

It was not until the 20th century that the wire-haired Schnauzer and the smooth-haired Pinscher, which until then had always been found in one litter, were bred separately from each other. In 1917, the wire-haired Pinscher was officially named ‘Schnauzer’. Compared to the Schnauzer and Miniature Pinscher, the rare smooth-haired Pinscher lost a lot of popularity during this time. In addition, the incipient industrialization made the former stable and coachman dog largely unemployed. With the new motorized wagons, which are gradually displacing the carts with draft animals from the streets, the German Pinscher more and more disappeared from the streets.

Fortunately, the breeder Werner Jung took care of the almost extinct breed in the mid-1950s. In 1958 a new generation of smooth-haired Pinschers entered the Pinscher-Schnauzer-Club. With the female Pinscher ‘Kitti vom Bodenstrand’ and the oversized Miniature Pinschers ‘Jutta Jung’, ‘Illo Fischer’, ‘Fürst Jung’ and ‘Onzo Illgen’ Jung ensured the survival of the German Pinscher. Even so, the German Pinscher is still a rare breed of dog. In the years 1998-2003 only 160-220 puppies were born per year. In 2003, the German Pinscher was put on the endangered pet breed list.

For some dog lovers this was a wake-up call and so after 2003 not only did the number of new breeders increase, but the number of puppies reported to the associations also increased again. When choosing a responsible breeder, there is again plenty of choice in Germany.

Due to the strong character of the German Pinscher, he has not been bred in masses until now and this prevents the ‘overbreeding’ of the breed, making them very healthy dogs. Breed-specific genetic diseases were spared the smooth-haired Pinscher. Inbreeding, therefore, only an examination for hip dysplasia is mandatory, examinations for other diseases such as, for example, hereditary eye diseases (color blindness) or Von Willebrand disease (blood clotting disease), on the other hand, are voluntary. Other than the required checkups and vaccinations, visits to the vet are rare for a German Pinscher. 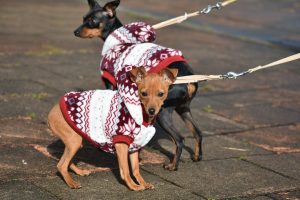 The great urge to move and the sometimes idiosyncratic character of the dog breed, on the other hand, means more work. As a former guard and hunting dog that used to take care of the house and yard independently, the German Pinscher still tends to dominate today. Despite its playfulness, the Pinscher is hardly suitable for families with very young children. He needs an experienced and confident owner who takes charge of the house and frees him from his original job of controlling strangers in or around the house.

The German Pinscher needs clear boundaries in his upbringing. Learning this requires persistence and, only when the situation calls for it, crackdown. However, the pressure and coercion can cause the opposite, but the intelligent dog must be able to understand the rules.

Physical stress is also essential for raising a balanced dog, who learns how to relax and does not have to arrange everything himself. The active and lively Pinschers are therefore most suitable for sporty people who like to exercise with their dog. Whether cycling, skating, horseback riding, or jogging is: The German Pinscher is an ideal partner for all recreational sports. He also brings joy to games of skill or dog tournaments. Search and tracking games can provide the necessary mental load. Thanks to his charming character, the Pinscher succeeds time and again in seducing his owners into joint sports and play activities. After such an intensive activity in the fresh air, his owner can count on an extensive ‘cuddle session’ at home. If you like an intensive physical and mental human-dog relationship and you like active dogs that think along, then the German Pinscher is best suited.

Discover our selection of dog food and dog accessories in our dog shop.