Ink For Three: The Original Trilogy 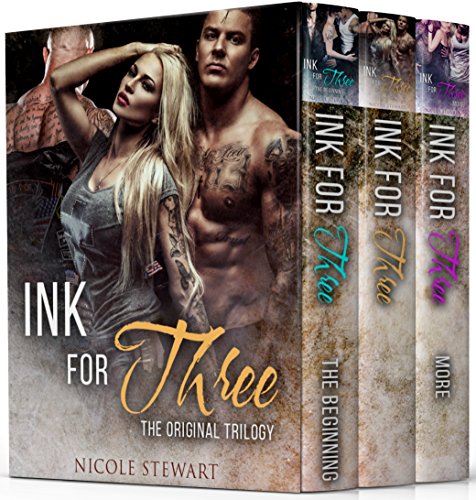 The Frost Studios MMF Bisexual Romance Trilogy is Now Available In One Package!

Sky has learned to expect exciting things at the tattoo conventions that she attends as a guest artist, but nothing could have prepared her for this.
Dane, a fellow artist and superstar in the tattoo world, introduces her to a rockstar friend and all around bad boy, Creed.

What she wasn’t banking on was just how "friendly" Dane and Creed can get with one another, and they’re all too willing to bring her along for the ride. Although the sex has never been better, emotions are running high as Creed grapples with his need to experience life in a big way while Dane is moving in the opposite direction.

Now through all the shattered feelings, jealousy and second guessing, it’s up to Sky to keep the best thing that’s ever happened to her intact.

Chad’s life has taken a hard left turn. Now he’s drifting through one town after another, looking for work and the sense of belonging that he had to leave back home along with what remained of a more innocent time. He’s broke and getting desperate. Something’s got to give.

A chance meeting with Dane Frost, an insanely hot, famous tattoo artist in a Las Vegas coffee shop ends with a job offer that Chad would be a fool to refuse. The pay may not be much, but for now he’s content with a living wage, new friends and a roof over his head.

Ginger is a strong woman with a dynamite personality. She loves her job as an artist with Frost Studios working for her idol, but she’s got major demons and an abusive boyfriend who continues to make her life hell. She needs a lover who will treat her with respect and give her the physical and emotional fulfillment that she so desperately lacks in her current relationship. Her soul is running on fumes.

When the new guy, Chad, starts working at Frost, she can’t keep her eyes off of him. His youthful exuberance and gorgeous body betray a maturity beyond his years. However, she still has her current relationship to think about, and she’s no cheater.

Xander is a beautiful man, and he knows it, but he’s also damaged goods and in serious denial about many things in his life. He’s used his looks and bedroom talents to score favors from older, closeted gay men on the down low for as long as he can remember. But now, Xander’s current sugar daddy has grown bored of their arrangement, so it’s time to sink or swim. Thankfully he knows of a hot young guy who recently took a room above the tattoo parlor where he gets inked. Maybe his artist, Ginger, can introduce them?

"Ink For Three: The Beginning (Prequel)"

Dane Frost hasn’t always been a superstar tattoo artist. Like most celebrities, his beginnings are considerably more humble. Before Dane can make big moves in the world, he’s got some serious self-exploration to do.

When a new hire, Abby, enters the scene as a guest artist at the seedy studio where Dane works, he is unexpectedly enamored of her.

Normally identifying as gay, Dane sees a woman who is every bit as strong as she is beautiful. Her ability with a tattoo gun is nearly unmatched, but it’s her throaty laugh and dangerous curves that have Dane under her spell. Dane is thrown by this new sexual confusion, but he knows as well as anyone that he can’t choose the people who enter his life and what effect they’ll have on his future.

Thankfully, Dane doesn’t have to go it alone. His extremely supportive and dashingly handsome boyfriend, Hector, is faithfully at Dane’s side as they both embark on a passionate journey toward broadening their sexuality.

Now all three of them will have to grow as people in order to navigate an emotional and romantic minefield. The results will do nothing less than shape Dane Frost’s entire future as a lover and an artist.

Be the first to review “Ink For Three: The Original Trilogy” Cancel reply

Ink For Three: The Original Trilogy